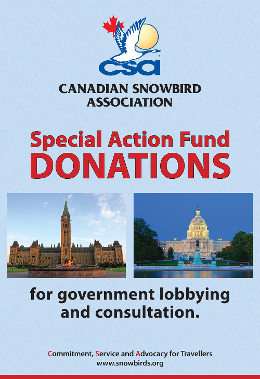 The advocacy work of the association is funded entirely through member donations which are held in a separate account, independent of the daily operation budget of the association, known as the Special Action Fund (SAF). The SAF is utilized when the CSA does not have the time to seek donations, and must engage immediately in government lobbying and consultation.

Recently, the Ontario Government announced that it is moving forward with plans to cancel the Out-of-Country (OOC) Travellers Program effective January 1, 2020. This program provides reimbursement to Ontario travellers for certain medical emergencies which transpire while residents are outside of Canada. The move is unprecedented and will make Ontario the only province in the country to terminate all funding for emergency medical services obtained while abroad.

In response, the CSA has used the resource of the SAF to mount a legal challenge against the Ontario Government for this blatant violation of the Canada Health Act.

It is paramount that we take a stand and put an end to the Ontario Government’s illegal actions, not only for Ontario travellers, but for travellers in jurisdictions across Canada which may attempt to implement similar policies.

The CSA has also employed the Special Action Fund for advocacy work south of the border. The association is currently working on extending the length of time eligible Canadian retirees can spend in the U.S. annually. This “Canadian Retiree Visa” or “Snowbird Visa” would permit Canadian snowbirds to spend up to eight months in the United States every year – a two month increase from the current six month limit. At the time of printing, this proposal can be found in multiple bills introduced in both the U.S. House of Representatives and the U.S. Senate.

Previously, the SAF was utilized to overturn Florida’s requirement that all foreign visitors operating a motor vehicle in the state obtain an International Driving Permit (IDP). After 9/11, it was also used to oppose a bill that would have limited Canadians to a 30 day visit to the United States.

Please consider donating to the CSA’s Special Action Fund at the link below.

A chronological list of our many accomplishments can be found below.