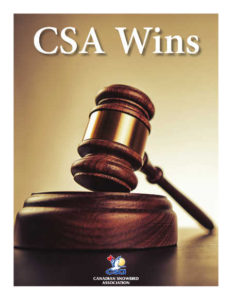 The Canadian Snowbird Association (CSA) is pleased to announce that we have won our legal challenge against the Ontario Government and their illegal termination of emergency out-of-country insurance coverage for Ontario residents. In a unanimous decision, the Ontario Divisional Court in Canadian Snowbirds Association Inc. v. Attorney General of Ontario struck down part of Ontario Regulation 259 which terminated OHIP’s Out-of-Country Travellers Program (OOCTP). In that decision, the Court found that, under the Ontario Health Insurance Act, the Lieutenant Governor in Council does not have the legal authority to enact regulations which would revoke the OOCTP.

On January 1, 2020, in an unprecedented move, the Ontario Government proceeded with their plans to eliminate the Out-of-Country Travellers Program, which provided reimbursement for Ontario residents who faced medical emergencies while travelling outside of the country. This policy change made Ontario the only jurisdiction in Canada to cut all emergency medical coverage for residents travelling abroad.

The Court’s ruling reinstates this important coverage for travelling Ontarians, restoring reimbursement rates to $200 and $400 per day for emergency inpatient services and up to $50 per day for emergency outpatient services. While the CSA continues to advise travellers to obtain adequate travel medical insurance prior to all trips abroad, re-establishing coverage will lower insurance premiums, making travel more affordable, particularly for seniors in the province.

Under the Ontario Health Insurance Act, the legislation which governs the Ontario Health Insurance Plan, corresponding regulations cannot include any provision which violates any of the five pillars of the Canada Health Act. One of the five pillars of the CHA is portability, which requires provincial and territorial health insurance plans to provide coverage for insured health services for residents who are temporarily absent from their home province or territory or from Canada. If insured persons are temporarily absent in another province or territory, the portability criterion requires that insured services be paid at the host province’s rate. If insured persons are temporarily out of the country, insured services are to be paid at the home province’s rate.

The CSA remains hopeful that the Ontario Government will respect the Court’s decision and not seek an appeal, as it did most recently in the court case regarding the government’s mandatory gas-pump decals.

While this is a clear victory for Ontario travellers, there is still much work to be done. The vast majority of provinces, including Ontario, still fail to meet the reimbursement threshold set by the Canada Health Act. The association will continue to lobby the provinces on this issue until they begin reimbursing out-of-country emergencies at in-province rates as mandated by the Canada Health Act.

We would like to take this time to thank our members for their support of this critical legal action. The association received donations to our Special Action Fund from across Canada and without your generosity, this win would not be possible. This court ruling is not only a win for snowbirds in Ontario, but it is a win for snowbirds across our country, as this decision will signal to other jurisdictions considering similar cuts to coverage that we will not back down.

The full text of the decision can be read here.