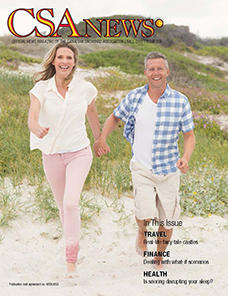 HEALTH : Is snoring disrupting your sleep?

Sometimes I think that we snowbirds are the only sane people left on earth. We have a wonderful lifestyle and are relatively free of “interventions” in our affairs and travels.

Looking out the window, we see insane political wars, both in the United States and Canada, and everywhere else for that matter. And dozens of real wars in every part of the world. Racism and hate seem to be the order of the day, but not for us.

Weather, what weather? All we have are crises (I had to look that word up), from one storm, to the next tornado, to the next flood, to the next massive heat wave. Did I mention the hundreds of out-of-control forest fires? And erupting volcanoes? And earthquakes?

When we think of climate warming, now climate change, we think of cities in China where you can’t see your next-door neighbour, or islands in the Pacific that are disappearing due to rising sea levels, and rivers that have flooded to extreme historic levels, displacing millions of people.

What you do not think of is going down in an elevator in the middle of Toronto and ending up in the basement with water up to within one foot of the elevator ceiling. The two men involved were rescued, almost by luck. We should also not forget that some snowbirds have had their homes burned to the ground.

But, with a little medical assistance on occasion, we snowbirds generally lead very active and happy lives. We seem somewhat insulated from the disasters of the real world. We should all pause and thank our God and, if that does not work for you, then you should thank your lucky stars.