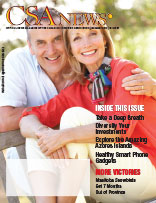 Manitoba Snowbirds Get 7 Months Out of Province

In April, news leaked that the United States Department of Homeland Security was requesting funding in their 2014 budget to conduct a study determining the feasibility of collecting a fee for passenger vehicles crossing the border between the United States and Canada.

They currently have some fiscal challenges and we understand that. Our view is that throwing up more obstacles at the border…which would hinder both trade and tourism…is not the best way to address those challenges. We don’t know how much the fee would be, or whether it would apply to entering the United States, exiting, or both.

Even if the fee were minimal, it’s our view that this still sends the wrong message to the United States’ biggest customer and closest friend. We are also very concerned about the delays which this would inevitably cause at all land border crossings. Crossing the border in your vehicle can be a lengthy process to begin with ‒ depending on where and when you cross ‒ turning border officials into toll collectors would only add to that time and aggravation. In short, we were opposed to this and we let the United States government know how we felt.

This proposal received widespread media coverage all over Canada, as well as in no less a publication than the Wall Street Journal in the United States.

Although it was just a proposal for a study to collect a fee, you’d be amazed at how quickly that can become a reality…particularly if it appears that nobody has noticed.

The Canadian Snowbird Association led the charge against this and I am happy to report that this proposal appears to now be dead on arrival in the United States Senate.

In May, the United States Senate’s judiciary committee voted to amend their comprehensive immigration reform bill to ban the fee outright. Even if the immigration bill does not pass, lawmakers in both houses of Congress have pledged to deny funding for the proposed study. No money, no study, no fee.

I would personally like to thank U.S. Congressman Brian Higgins from Buffalo, New York and Senator Chuck Schumer, also from New York, for helping us to get this stopped. Another win for the Canadian Snowbird Association.

As you’ll read in Ron Steeves’ Government Relations Report, we recently claimed a victory in Manitoba that falls closely on the heels of our win in British Columbia, which we covered extensively in the spring issue of CSANews.

None of these achievements would be possible without the feedback and support of you, our members. You let us know how you feel about particular issues and we make sure that feedback is passed along to our elected representatives.

Having said that, I would also encourage all of you to contact your elected representatives directly and let them know how you feel about issues of concern to you as a snowbird. The more they hear from us, the louder our voice becomes.

We have now put on our website (www.snowbirds.org) a section entitled “Guidelines to Writing Government Representatives.” It’s simply a list of helpful suggestions of which you should be aware when contacting your elected officials. It also briefly summarizes some of our key issues and contains links to the contact information for every federal and provincial/territorial representative in Canada, so that you don’t have to go hunting.

We understand that contacting government can be intimidating if you’ve never done it before. Hey, it might just be that you don’t have the time to do it. All that this section does is attempt to make the process quick, convenient and effective if you decide to make contact. These are just tips; they are just there to help. As always, if you have any questions, please feel free to contact the office. Don’t worry, we’ll be bringing these issues forward on your behalf regardless.

I hate to say it, but this is Canada and it means that winter will be here before you know it. One of the best ways to prepare for your winter down south is by attending one of our annual snowbird Lifestyle Presentations.

This year, we’ll be touring throughout Ontario with stops in Port Hope, Richmond Hill, Burlington, Sarnia, Niagara Falls, Parry Sound and Nepean. We’ll be wrapping things up with a stop in the beautiful city of Montreal, Quebec, towards the end of September.

Please look for dates and box office details elsewhere in this issue of the magazine. Whether you’re thinking about exploring the snowbird lifestyle for the first time, or you’re a veteran winter traveller, these shows are packed full of useful information and entertainment. As always, all shows are free of charge and open to the public…so please feel free to bring a friend.

Lois and I wish you a safe and relaxing summer with family and friends.