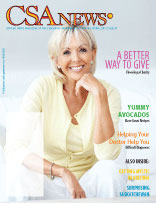 A Better Way To Give – Choosing a Charity

Getting Mystic in Arizona

My father would have said, “Gee Willikers!”; that was his way of saying “unbelievable.” Over a few days in early May, we had both the final chapter in the Osama bin Laden saga and a spectacular ending to, what I thought, was going to be a very boring Canadian election.

Who would have thought that this election would decimate the Bloc Quebecois -the party that wanted to destroy Canada? I always thought that Orange Tide meant doing your laundry, but it will now always be remembered as Jack Layton’s formidable feat of leading the New Democratic Party to victory. In one fell swoop, he vanquished the Liberals, seized more than 100 seats to become the Opposition leader, and struck a blow for Canadian unity – in routing the Bloc – that gives me great hope for our future. Your mother must be very proud, Jack, and so are we.

Later in the magazine, you will find out what Jack thinks and what he stands for, as he agreed to write an article for us. My guess is that he will make an excellent Opposition leader in our Parliament and he obviously will support our CSA objectives.

And Prime Minister Harper, your ultimate wish of a majority government has been granted. A strong and secure Canada lies ahead. There will be challenges, of course, but it appears that this new Parliament can now deal with them effectively. Our sincere congratulations and best wishes to all of our newly elected politicians; we will be speaking with you… very soon.