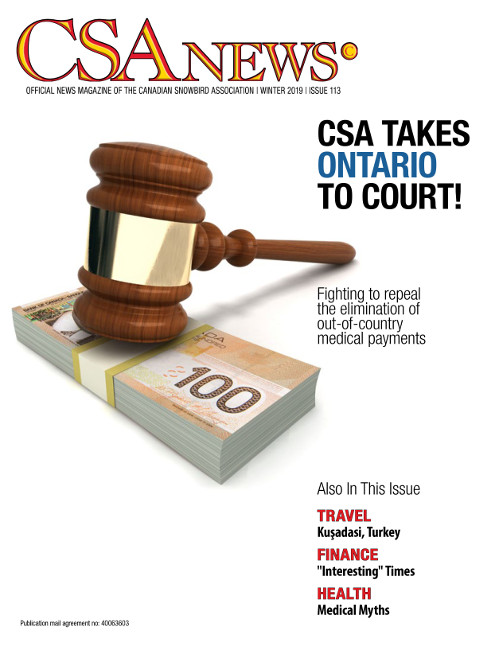 It is in the hands of the courts. The outrageous abuse of the Canada Health Act by the Ontario government will hopefully be decided quickly. As I am sure you are all aware, the payments for medical services outside of Canada were recently cancelled by the Ford government. They will now pay NOTHING.

One of the pillars of the Canada Health Act is portability. This means that your provincial health insurance follows you, wherever you go. Mind you, they would only pay what it would cost in your province; but that is fair. The current incompetent provincial government has decided that portability was only meant to be within Canada. How many lawyers did they call before they got the “right” opinion on that? Perhaps they should read the act again and, heaven forbid, talk to the legislators who wrote the act in the first place. They will forcefully tell the government what they meant, set them straight on the meaning of portability and, hopefully, even demand that the province obey the law.

If Ontario gets away with this “fraud,” then all of the other provinces will eventually follow, and the big insurance companies will smile all the way to the bank. Less administration to perform and higher insurance premiums for travel medical insurance! And you will have to pay for the province breaking the law.

An extension was granted for the new regulation’s introduction until January 1, 2020, possibly because most snowbirds would be away then and would not be able to fight it properly. Well, think again; we are here and we are fighting it.

Our first step is to get an injunction forcing the province to delay implementation of the cutbacks until a proper court can rule on the legality of this breach of law. Our second step will be to force the provinces to pay what the Canada Health Act requires. In Ontario, I would estimate that the cost of a hospital day is at least $1,500; and that is what they should be paying. This would mean lower insurance premiums − then we all win.

The CSA’s Special Action Fund will need your help to go the distance. Think about sending them a Christmas card with a $100 cheque in it. I have. Together, we are strong.

Have a wonderful holiday and a spectacular and healthy winter.

Defending the rights and privileges of Canadian travellers for over 30 years.