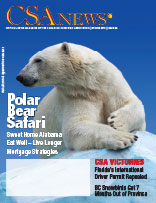 I don’t have an IDP (International Driver’s Licence). I don’t want one and I don’t need one. Just another victory for the CSA, as you will read in these pages! Governments DO listen to us, but it does take time and considerable effort to get the job done and the word out.

We were quite pleased when Rick Thorpe, the previous finance minister for the province of British Columbia, joined the CSA’s Board of Directors. We saw our first real probability of getting something substantial done in B.C. And he has delivered! It is with many thanks that we congratulate Premier Christy Clark and her government for allowing snowbirds to travel for up to seven months each year and still maintain their provincial medical coverage. This has now been enshrined in legislation, as well.

But…do not misunderstand this seven-month right to travel if you live in British Columbia. The United States still limits your visits to six months in any 12-month period. The extra month can now be used to visit kids or parents in other provinces, to take a cruise to the Caribbean or to tour Europe, or for anything else you wish to do. We must continue to work on our Snowbird Visa and that will resolve the remaining part of our problem in the U.S. This, of course, also applies to any province that allows more than six months outside of the province, such as Newfoundland and Ontario.

The Snowbird Extravaganzas and CSA Winter Information Meetings… as well as the picnics…were all fabulous successes, with record attendance at many venues. Thank you for your many kind letters and thanks to our wonderful “roadies,” who make it all possible. Chris and Paula and Hazen and June and Ron and Judy and Gerry and Joan and Bob and Lois and the other Bob and our “entertainers” put on one heck of a show. None of this would be possible without the support of our CSA Directors and spouses and the many volunteers who donate their time and efforts. Wow! What a way to spend a special winter’s day – with the CSA.