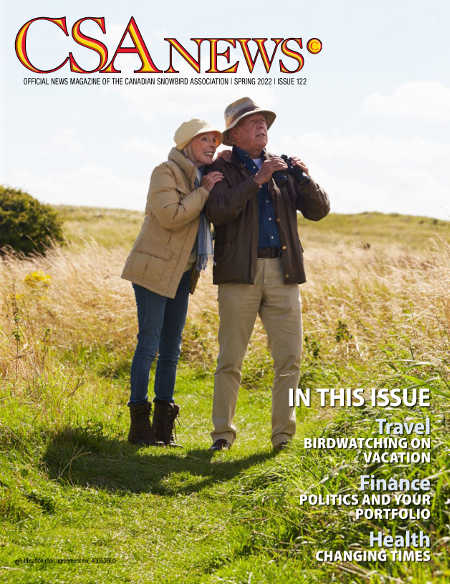 Finance
POLITICS AND YOUR PORTFOLIO

When we were locked in our Covid-safe homes, both here in Canada and in the United States, we all became much more aware of our environment and our surroundings. We had very little else that we could do. It is not that we did not pay attention before all of this nonsense, we just had far more time to contemplate our homes and backyards and we became much more aware of everything.

The number of birds flitting about and even living in our trees was amazing. Sure, there have always been birds around, but we never really had time to watch, and learn. After a while, we were hooked. Every new bird species was an “event.” The baby birds that suddenly appeared were fragile and we watched them learn how to fly and survive in this unreal world. What a pleasure it was, and is.

I guess that you could now call us “birdwatchers.” This is one of the most popular hobbies in America with estimates ranging up to 60 million people (now 60 million and two). Only fishing can claim that kind of participation. There are sponsored tours to birding regions in every province and state; most are inexpensive and many are free. It is a great way to meet good people who enjoy the outdoors and each other’s company. On Page 14, Barb and Ron Kroll outline several of the best opportunities for birding in Canada and I would recommend any of them.

Our most interesting “observation” was when a red-tailed hawk dove down on the top of our bird feeder three feet from our kitchen window. It had a life-sized metal cardinal on top, for decoration, and it was to be the hawk’s lunch. It struggled for about a minute, trying to wrench it free, and then gave up. The hawk hit it so hard that I was concerned it would be injured, but it just flew away − frustrated, I am sure.

And just for curiosity, most of us know that a flock of crows is properly called a “murder” of crows. For ravens, the word for a flock is an “unkindness” of ravens. Check this out for fun…

My son Jason taught me a new bird word – “murmurations.” This normally relates to starlings that swoop and fly in huge formations. So much more to learn.