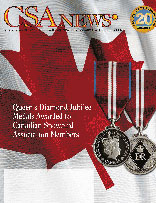 The most romantic place on the drive to Florida

Why I love Texas food

Making sense of the mess in Europe

The changing management of prostate disorders

It is an honour to be in such company!

As you may have surmised from our front cover, this issue of CSANews is dedicated to those wonderful people who have given their time, their energy and a significant proportion of their retirement years to helping others. In most cases, they received no pay for their labours and often worked behind the scenes and in relative obscurity to make the Canadian Snowbird Association the success that it has become. It is time that they were recognized publicly for their dedication and commitment.

They have moved unmovable governments, fought and amended insane regulations, had legislation revised that benefited all Canadians and are continuing to advise governments in both Canada and the United States on issues relating to travel and seniors. The Canadian Snowbird Association is known and respected throughout North America and their accomplishments have been incredible. The CSA stopped U.S. legislation to limit Canadian travel to the United States to 30 days, they stopped legislation that would have kept Canadians prisoners in their own provinces and they are making sure that you can get enough drugs to last for your entire trip when you travel. Following years of work, several provinces have now agreed to comply with the Canada Health Act. Other provinces are reviewing their positions and, hopefully, will join the “good” provinces in obeying the law. “Incredible” IS the right word.

The Queen Elizabeth II Diamond Jubilee Medal is a tangible and visible way to recognize these outstanding Canadians who have built, and continue to build, our caring society and country through their service, their contributions and their achievements. We have been allotted only 40 words to describe their individual contributions, but a complete book on each one of these people would certainly be insufficient. I am honoured to have known you and to have worked with you over the past 20 years.